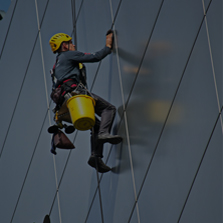 Two weeks ago, my cousin posted on Facebook a photo of herself trimming a hedge that surrounds her unit. She was standing on a plastic garden chair, so I sent her a message. I told her that as a nurse, she should know better than to use a chair to stand on and she should use a platform ladder instead. The replies I received were for me to pull my head in, as it’s only a chair and I should stop being a safety nerd. Last week I took my daughter to afterschool care and noticed the director was absent. I asked a staff member where she was and was told she was in the hospital. She had been standing on a chair in her kitchen, had fallen off and broken her back when she impacted the floor. She too probably thought, it’s only a chair, what could go wrong. Now imagine your co-workers and family. What would you do and how would you cope, if a work or family member was permanently incapacitated or killed, because they had a completely preventable fall. Take the time to stop and think about the consequences before carrying out any work at height. In Australia between 2012 and 2016, 132 workers were killed falling from height. Don’t let yourself become a statistic. Only use approved equipment when carrying out any work that involves working at height, and follow the practical guidance found in the Code of Practice for managing the risk of falls in the workplace. Cheers, Nick Lines